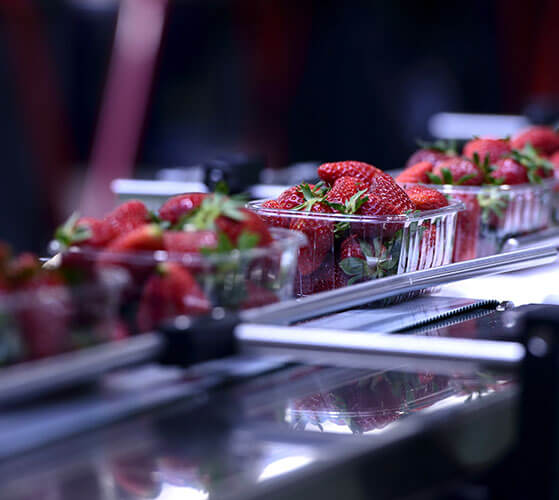 Integrate with scales from your chosen vendor of weighing equipment.  Weigh entire trucks, trailers, or pallets.  Using farmsoft, the tare of truck, trailer, containers, and pallets can be deducted from the gross delivery weight.

Improve your delivery processes by allowing farmsoft to automatically grab the weight of a delivery and deduct tare and container and packaging weights to get the true and accurate net weight. Print labels and store your fresh produce rapidly.

Scale integration for fresh produce requires vendors provide an API (REST) or an app that inserts the current scale weight into the clipboard on a Windows or Android device.  This allows farmsoft to integrate with scales and weighing equipment from a large number of vendors at a very low cost to you.

Automation On Fruit And Vegetable Grading System And Food Traceability

Zest Labs to determine how Zest Fresh can help both monitor and improve freshness, while providing complete traceability through the cold supply chain,” said John Griesenbrock, Hy-Vee's Vice President, Produce/Health Markets, in a press release. With traceability support, we will become even more invested in bringing the freshest and highest-quality produce to our customers.”

The Produce Traceability Initiative is designed to help the produce industry maximize the effectiveness of current traceback procedures, while developing a standardized industry approach to enhance the speed and efficiency of traceability systems for the future.

The Tester Amendment to FSMA contains flawed thinking in that small growers have less risk of having a food safety issue. There is no reason that any grower should be exempt from food safety guidelines, including traceability. A small grower selling their product into the marketplace where it will end up on a family's table should have to play by the same rules as everyone else. There are many low-cost solutions to print labels. One thing the federal government could do is provide subsidies to small growers to help them obtain a GS1 number. The bottom line is: If you are in the farming business, you should be taking precautions to ensure your produce is safe and traceable regardless of the size of your operation.

Sugar has never been such a public enemy. Blamed for obesity, contributing to heart disease, diabetes and other health threats, sugar is the cause of additional taxes on sodas, is what consumers are trying to eliminate from their diets, and has even been given a second line on the upcoming Nutrition Facts panel. Added sugars will be called out on a separate line on the FDA's updated Nutrition Facts panel, which originally was to become the rule this July 26 but has been delayed indefinitely, probably till January 2020. Whole fruit, fruit pieces, dried fruit, pulps and purees (which contain intrinsic sugars) are not considered added sugars. If a fruit juice blend is reconstituted such that the sugar concentration is less than what would be…

The Global Food Traceability Center will serve all aspects of the food system by generating knowledge that addresses research gaps, and delivering applied research, objective advice, and practical expertise about food product traceability and data collaboration for private benefit and public good.

Packing half vine tomatoes to Average ‘e’ and Nett Minimum weight with maximum efficiency and accuracy but with minimum Give Away & Waste is particularly challenging due to the difficulty of matching and combining half vines to tight specifications. Plus Packhouses need flexibility and portability of systems.

"Traditional weighing systems require constant re-adjustment of the vines or snipping to get the best weight which leads to low productivity, overfill whether weighing to Average ‘e’ or Nett Minimum Weight and waste or downgraded lose tomatoes. A problem which can directly impacting overall profitability."

Aja claims that dedicated half vine tomato packing lines can minimise labour, speed up the operation and perform with a new level of automation with their Aja Selector Combination Scale.

"The Aja Selector Combination Scaletakes away the guessing and juggling of vines. Achieving this with minimal give away, no waste and significantly increasing overall productivity."

"Based on the standard multihead weigher concept while one operator feeds the pans with single vines the Selector Scale calculates the best combination of vines closest to the target weight and activates LED lights adjacent to the pans telling the second operator which ones make the weight and to be removed to make the pack. Once removed the process is repeated. The calculation is virtually instant and good operators can pack from between 14 - 18 packs per minute with low or zero Give Away."

Zero Give Away is achievable in Packhouses with 4 or more Selector Scales which are networked with Aja’s ALTOS wifi Average ‘e’ Weight optimising software. Altos drives down give away optimising pack weights across several selector scales and provides management with complete control of the packing operation with real time data on operator speeds and Give Away. This data is generally displayed as Operator Productivity Performance on a large TV screen in the Packhouse for all to see.
‍

‍
"In Packhouses where there is a requirement to pack loose as well as vine tomatoes there may be a need for manual under – over traffic light checkweighers. In these applications the Aja ALTOS software system once again offers the very best Give Away and Productivity."

"Operators are rapidly guided through each weighing operation by a simple traffic light bar graph system. The ALTOS software with automatic pack weight optimising works continually in the background adjusting individual scale target weights to ensure minimum Give Away while adhering to Average ‘e’ Weight legislation over a given production run or batch. ALTOS is constantly pulling the average pack weight close to the declared weight. Operators are monitored in real time for speed and accuracy and any errors or overweighing’s are flagged up by a series of alarms."

"Typical Give Away can be as low as 0.1% depending on piece size. Plus ppm is optimised using best practice designed weighing-packing station. As with the Selector Scale installing the large screen KPI display adds gives management and staff total visibility of productivity and performance," Aja claimed.

More and more customers of van der Linde Emmeloord, located in Holland, were requesting Big Bags for potatoes filled to a specific weight. Big Bags were historically filled on volume and had to be weighed on a separate scale where potatoes had to be added or removed manually. With the increasing demand for Big Bags based on weight, this became a time consuming job.

Bigbagstore.nl came across a weighing Big Bag Filler from PIM-Machinery which filled Big Bags fast, in combination with a low dropping height and could be accurately weighed. Bigbagstore.nl advised van der Linde to send an inquiry to PIM-Machinery.com with regard to their new situation. Meanwhile the machine has filled many Big Bags with potatoes accurately to full satisfaction.

PIM-Machinery Holland is active in the area of automated (computer)weigh- and bagging solutions for the agricultural sector. PIM supplied and commissioned successfully already many computer weighers including bagging machines. The weigher is especially strong with large product, handles perfectly unwashed product (no vibration lanes which have to be cleaned!!) and can dump weights till 25kg in 1 dump. The advantage of the machine is that it can perfectly be combined with consumer pack machines in the middle underneath the discharge belt (e.g. from ±1kg ) and on the outside it can be combined with baggers for larger (export) weights.

The new generation of ERC multihead scales with exponential accuracy are able to make more packaging out of the same amount of packaging than was the case for the last generations of mulithead scales.

This may be due to the two step approach, in which the accuracy is improved on two fronts. The first step is the internal weighing accuracy of the weighing bins. It has been dramatically improved compared to the last generation of scales. The second step is the number of possible combinations to make a final weight. In a 16 bin scale the number of combinations increases exponentially. This means that a 16 bin ERC scale can pick from over 12500 combinations of weighing bins to sort the most accurate weight. This means that you can make more packaging from the same amount of product compared to the last generation of scales.
‍

A practical example: a customer from the United States replaced a number of his scales with the new generation of ERC round headed scales. After a while it turned out that they could sell a truck load more onions per week whilst the amount of incoming product had remained the same.

Even at very high speed the scales retain their accuracy. It is important to have the scales gauged. This can be done through ERC.

Labels and documents for fresh produce