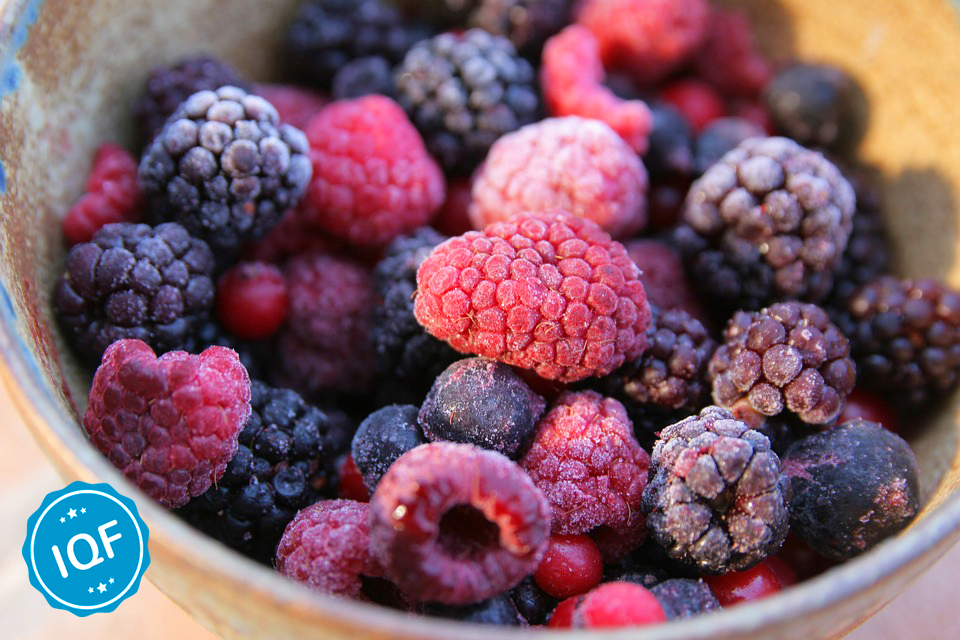 Frozen foods are ubiquitous in American supermarkets, and are increasingly a part of the food industry worldwide. Fruits and vegetables are usually frozen within hours of being picked, and when thawed, they are very close to fresh in taste and texture. The frozen meal is increasingly popular in time-starved American households. If the meal can be heated in a microwave, total time from freezer to table can be less than five minutes. Besides offering fresh taste and convenience, freezing is also a safe method of preservation, as most pathogens are inactivated at low temperatures.

The frozen food industry dates back to the early years of the twentieth century, when some foods were preserved by the so-called cold-pack method. Food handlers would wash and sort fruits or vegetables, then pack them in large containers holding from 30-400 lb (14-180 kg). The large containers were placed in a cold storage room for several days until the mass was frozen solid. Cold pack foods did not have the quality of modern frozen foods because of the time it took for the food to freeze. In slow freezing, the water in the food crystallizes, forming large needles of ice. These shards of ice destroy cells walls, and so when the food is thawed, it has deteriorated in taste and texture. The innovation that made the current frozen food industry possible was the invention of quick freezing by Clarence Birdseye.

Birdseye was born in Brooklyn, New York, in 1886 and studied biology at Amherst College before drifting to the Canadian Arctic to work as a fur trader and trapper. Living with his family in a remote Labrador cottage, Birdseye became fascinated with freezing food, and he experimented with many kinds of meats and vegetables. Birdseye noted that freshly caught fish that froze in seconds in the sub-zero arctic air tasted perfectly palatable when later thawed and cooked. He experimented with quick-freezing other foods, including fruits and vegetables, and soon became convinced that he had a viable commerical venture. Birdseye returned from Canada in 1917 and devoted himself to inventing a mechanical freezing device. He won his first patent in 1921, and established a frozen fish company in New York in 1923.

His first frozen food business failed to spark interest, and a second company he founded in Gloucester, Massachusetts also withered. Yet Birdseye continued to develop new freezing technology, decreasing the time it took to freeze foods. In 1929, the General Foods Corporation bought out Birdseye's enterprise, paying an enormous sum for his patents. General Foods made an intensive marketing push, installing freezers in grocery stores and developing freezer rail cars for long-distance distribution. Though American families still scoffed at frozen foods, the company began to make inroads with commercial food preparers such as hospitals and schools. American soldiers ate frozen foods during World War II, and after the war, the industry took off. Home freezers grew larger, and more and more items, from vegetables to pizzas to entire meals, became available in grocery stores.

Birdseye first froze fish and vegetables by immersing them in a circulating brine cooled to about -45° F (-42.8° C). Later he developed a so-called belt froster. This passed packages of food between two sub-zero metal surfaces, and so cooled top and bottom at the same time. This greatly decreased the time it took to freeze foods. Another innovation attributed to a General Foods scientist was the process of blanching vegetables before freezing. Blanching entailed immersing the vegetables in boiling water for a few minutes to halt the activity of certain enzymes. This preserved their flavor much more effectively. Current methods of freezing typically use the air blast method, where ultra-cooled air is blown on the food in a narrow tunnel, or by the indirect method, where the food is passed along metal plates cooled by a refrigerated liquid. Food can also be frozen cryogenically. In this method, the outer layers of the food are taken to far below their actual freezing point by passing quickly through a tunnel cooled by liquid nitrogen to as low as -80- -120° F (-62.2- -84.4° C). After the food exits the cryogenic tunnel, heat from the core of the food permeates to the outside, resulting in a final stable frozen state. Some products also use an immersion method. For foods with a viscous sauce or sticky surface, the surface might be immersed in an ultra-cooled liquid for only a few seconds, and then the food can be frozen by air-blasting.

Optimal freezing methods vary considerably with each food product. And not every food freezes well. Certain varieties of peas or strawberries for example have been found to freeze best. This might be because of their firm texture or specific sugar content. So farmers will grow these special varieties under contract with a frozen food company.

“If urgent steps are not put in place to prevent it, New Zealand is likely to be swamped by imports of frozen potato chips at those extraordinary prices. That, together with the existing impact of the current pandemic will in turn cause the New Zealand potato-growing and potato-processing industries to suffer severe and prolonged damage.”

“This may lead to potato growers planting alternate crops and in turn lead to a shortage of New Zealand grown potatoes, which given New Zealand’s reliance on potatoes as a source of food, will represent a serious risks to food security.”

The raw materials for frozen foods include whatever is to be frozen, e.g. fish, chicken, green beans, pizza. In most cases, the food is specifically cultivated or adapted for freezing. In the case of frozen desserts such as cakes and pies or entrees such as meat loaf and gravy, the recipe must be tested and altered so that it freezes well. Large companies will order optimum ingredients according to standards they have established during their product testing. For example the noodles used in a frozen pasta entree may be ordered in bulk from a distributor that makes them in a certain specified width or viscosity or flour content according to the precise need of the frozen food manufacturer. In this respect, ingredients in a frozen meal may differ from what a home cook would buy at the supermarket. But in general, frozen foods do not require a host of extra ingredients such as preservatives. Added ingredients are most frequently thickeners and stabilizers such as starch, xanthan gum, and carrageenan. These help retain the desired texture of the food after thawing. Recipes for foods destined for the freezer may also do better with the addition of a sauce or glaze, because this protects the food from dehydration when it is passed under the freezing air blast. Vegetables or fruits destined for freezing may also be picked at a different time than they would be if they were to be sold fresh, because they need to be at optimal tenderness.

The freezing equipment is typically made from stainless steel and other metals. The gas used for freezing is most commonly ammonia. Freon is used in some systems, though because it breaks down the ozone layer, ammonia is more environmentally sound. Cryogenic freezing uses liquid nitrogen.

By using a fully optimized and harmonized IQF processing line, the end-product will have the best quality with a natural appearance,  appetizing color and bite and preserved nutritional value.

The rain-shower and cross-flow systems which are at the heart of the IF Blancher and Chiller help achieve the quickest heat transfer while the recirculation system optimizes water consumption. The adjustable fans’ speed of the IQF freezer, translates in significant energy savings.

The quick and efficient blanching and chilling together with the unique aerodynamics of the OctoFrost™ freezer, result into less snow formation when compared to other technologies, which means minimum product dehydration and higher yield for the processor.

The OctoFrost IQF Processing Line has been designed for a reliable food safety. Every part of the blancher and chiller which comes in contact with the blanching water can be cleaned by CIP (Cleaning-In-Place). The free-standing body, lack of joints and exchangeable bedplates of the OctoFrost™ freezer contribute even further to a truly reliable food safety for IQF processors. Many times, the food processors are not sure which combination of processing equipment they need, how these can be optimized to work together, and who should be responsible for the whole line functionality when you have a number of different suppliers. The final freezing result and the energy efficiency can be compromised the equipment of the IQF processing line are not optimized or chosen right. Therefore, many processors prefer to have a single supplier for their complete IQF Processing lines. This is where OctoFrost comes to help food processors, with the OctoFrost IQF Processing Line – an innovative food processing technology that offers processors the advantage of having the most efficient equipment and a single supplier for the whole line.