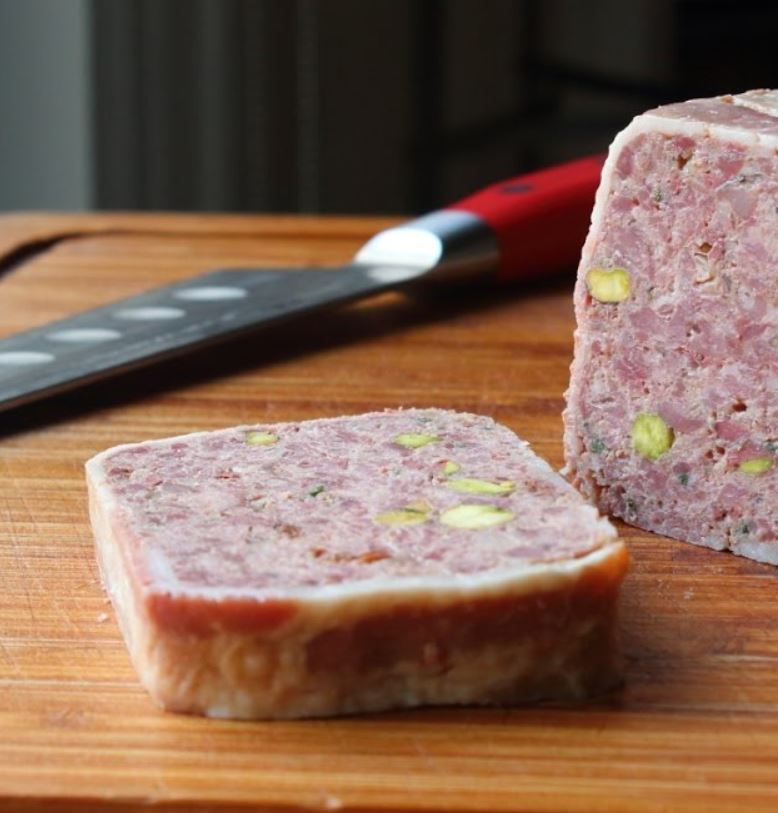 In French or Belgian cuisine, pâté may be baked in a crust as pie or loaf, in which case it is called pâté en croûte, or baked in a terrine (or other mold), in which case it is known as pâté en terrine. Traditionally, a forcemeat mixture cooked and served in a terrine is also called a terrine. The most famous pâté is probably pâté de foie gras, made from the livers of fattened geese.[1]

Pâté en croûte is baked with the insertion of "chimneys" on top: small tubes or funnels that allow steam to escape, thus keeping the pastry crust from turning damp or soggy. Baked pâté en croûte usually develops an air bubble under the crust top as the meat mixture shrinks during baking; this is traditionally dealt with by infusing semi-liquid aspic in the hollow space before chilling.

In Poland, pasztet is made from poultry, fish, venison, ham, or pork with eggs, flour, bread crumbs, and a varied range of additions, such as pepper, tomato sauce, mushrooms, spices, vegetables, ginger, nutmeg, cheese, or sugar.

In Russia and Ukraine, the dish is mostly prepared with beef, goose or chicken liver[2] and thus is commonly known as pechyonochniy pashtet (Russian: печёночный паштет, "liver pâté"), however other meats also can be used. Unlike the Western European method the liver is first cooked (boiled or fried) and mixed with butter or fat and seasoning such as fresh or fried onion, carrots, spices and herbs. It can be further cooked (usually baked), but most often is used without any other preparation. In Russia, the pâté is served on a plate or in a bowl, and is often molded into the shapes of animals, such as hedgehogs.[3]

A similar recipe is known as chopped liver in Ashkenazi Jewish cuisine, where schmaltz is used instead of butter and hard-boiled eggs are usually added. Another common type of pâté in Jewish cuisine, also popular in Russia and Ukraine, is vorschmack or gehakte herring (chopped herring).[4][5]

In the former Yugoslavia, pašteta or паштета (a thinly pureed pâté) is a very popular bread spread usually made from liver, chicken, pork, beef, turkey or less commonly tuna or salmon.

In Vietnamese cuisine, pâté is commonly used on bánh mì baguette type sandwiches.[6] Pâté of this type is more commonly made from liver.

Liverwurst, leberwurst, or liver sausage is a kind of sausage made from liver. It is eaten in many parts of Europe, including Austria, Bulgaria, Croatia, the Czech Republic, Denmark, Finland, Germany, Hungary, Latvia, the Netherlands, Norway, Poland, Romania (especially in Transylvania), Russia, Serbia, Slovakia, Slovenia, Sweden, Ukraine, United Kingdom; it is also found in North and South America, notably in Argentina and Chile.

Some liverwurst varieties are spreadable. Liverwurst usually contains pigs' or calves' livers. Other ingredients are meat (notably veal), fat, and spices including ground black pepper, marjoram, allspice, thyme, ground mustard seed, or nutmeg. Many regions in Germany have distinct recipes for liverwurst. Adding ingredients like pieces of onion or bacon to the recipe make each variety of liverwurst very important to cultural identity. For example, the Thüringer Leberwurst has a Protected Geographical Status throughout the EU. Recently, more exotic additions such as cowberries and mushrooms have gained popularity.

The word "liverwurst" is a partial calque of German Leberwurst 'liver sausage', and "liver sausage" a full calque.[1]

Liverwurst from the Rhineland-Palatinate in Germany

In some parts of Germany, liverwurst is served sliced on a plate, often with mustard or pickled cucumber. It is most commonly eaten spread on bread, as it is very soft.

In Hungary, liverwurst is customarily served on open sandwiches, or with cheese as a filling for pancakes which are baked in the oven.

In Romania liverwurst is called lebar,[2] but unlike the German sausage leberwurst that uses beef, the lebar uses only pork. Lebar is eaten mainly for the winter holidays. It tastes fragrant and sweet with liver pâté. It is generally used as Christmas Eve dinner, sliced on bread with mustard and murături.[3]

Liverwurst is typically eaten as is, and often served as traditional or as open-faced sandwiches. It is popular in North America with red onion and mustard on rye or whole grain bread. In the Southern US, and the Midwestern US, liverwurst is served with slices of sweet pickles (gherkins pickled with sugar, vinegar, and mustard seeds). In the Northeast US, liverwurst is served with dill pickles (gherkins pickled with salt and dill).

In the Midwestern United States, liverwurst is also known as liver sausage or Braunschweiger. Liverwurst is typically served on crackers or in sandwiches. It is often sold pre-sliced.

Pasztetowa is made using calf's liver. It is often served on rye bread with horseradish-style mustard. Pasztetowa is popular throughout the year, but is most frequently served at Christmas and Easter.

Chicken liver pâté/parfait recipes were sourced from randomly-selected cookbooks, the internet and from retail packs of chicken livers. Before use, all recipes were assessed by scoring the Provenance, Relevance, Objectivity, Method, Presentation and Timeliness of each between 0 and 5 for each attribute. Acceptably-scored recipes were scrutinised as a means of identifying any practices that were likely to be beneficial in reducing the numbers of campylobacters contaminating livers. From assessment of these recipes a protocol was developed from the identified likely beneficial manufacturing stages and ingredients.

Using contaminated livers, the recipe was trialled and a batch of pâté was manufactured with rigorous monitoring of the cooking temperature. The pâté was stored under refrigeration and a portion tested (ISO 10272-2) to confirm that the effective cooking had destroyed the campylobacters. The pilot batch of pâté was subjected to an initial round of assessment by a trained test panel to determine if the recipe generated a palatable pâté.

Approach 3: Determination of the contribution of each antimicrobial pâté liver sausage: manufacture stage

This study proposed five campylobacter interventions of freezing livers, organic acid wash, exposure to essential oils in herbs in a marinade, a flambé in brandy and heat treatment to 70oC. The effect of freezing raw livers is already known (Harrison et al 2013). The relative impacts of organic acid immersion, a herbal milk marinade, flambé and effective cooking on Campylobacter populations was measured. Three different batches of livers were washed in organic acid and marinated with different batches of herbs under refrigeration and the numbers of campylobacters determined before and after each treatment. The marinated livers were further processed into pâté with numbers of campylobacters determined before and after flambé and the cooking of the livers. Replication was as described in the microbiological testing section.

Approach 4: A comparison of the sensory characteristics of pâté manufactured from fresh and frozen livers

A blind taste comparison was made of two parfaits prepared from a single batch of livers, half of which were frozen overnight; with the other half being chilled overnight. The trial also assessed the sensory characteristics of the parfait (texture, juiciness, taste, colour). At the end of the trial, a statistical analyses report was generated to indicate any significant differences between the treatments and rank the samples based on user-stipulated attributes.

A literature search identified 40 pâté manufacture recipes. Recipes were appraised and stages that were likely to be antimicrobial were assembled to form a new protocol that included washing with organic acid, freeze-thaw and flambé in alcohol. Contaminated livers from organic clearance flocks were obtained directly from slaughterhouses as high-risk material and the effect of each stage of the protocol to campylobacter populations on naturally contaminated livers was determined.

It was found that:

The antimicrobial protocol stages did reduce the number of campylobacter bacteria, but not significantly if thermal processing was ineffective. Cooking to 63oC was confirmed to be a critical control point for campylobacters in pâté. Sensory assessment of pâté manufactured using the protocol from fresh or frozen livers were determined both to be acceptable, with an overall preference for pâté made from frozen livers.

This study has validated a protocol for commercial quantities of pâté that reliably destroys campylobacters in highest risk livers sourced from final clearance flocks. In addition, the protocol generated pâté that is pink in colour and has other organoleptic properties considered desirable by caterers.